Natural enemies are a common trope every species on the planet faces. Whether it be a flower bed being ravaged by a rabbit or said rabbit being hunted down by a wolf the circle of predator’s continues through every class. Such is the case when it comes to the Colorado forests lands and the ever-growing population of the Mountain pine beetles invading the lush pines of the Rocky Mountains!

Mountain pine beetles are bark beetle’s native to Colorado and the Rocky Mountains that predominately infest ponderosa pine, lodgepole pine, and limber pine trees. In addition, several evolved species of the mountain pine beetle engineered to spread more rapidly have been discovered in parts of Canada and Montana as well. 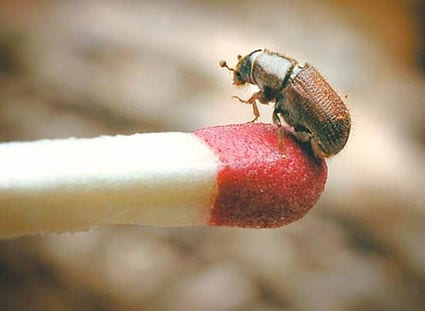 A fungus carried by the MPB infects and eventually kills the tree. These dead trees take on a sort of rust look in coloration upon infection. These beetles initially prefer large diameter trees to begin with when searching for hosts but will move on to lesser pines once those are depleted from the area.

Roughly a fifth of all Colorado forestland has been devastated by the mountain pine beetles overpopulation over the past few decades. Colorado State Forest Service has estimated that an astounding 3.4 million acres of forestland, or nearly 800 million trees, have been killed by these beetles. These trees stand dead in the forest as potential fuel for the next wildfire to hit the state. Other areas affected by these beetles include parts of Canada, the Dakotas, Montana, and Idaho.

However, despite what many may think, the beetle-kill trees are still fine to use for wood products. Many sawmills in Colorado and surrounding areas have been incorporating the lumber into the creation of wood products such as furniture, flooring, house frames, fencing material and fuel for machinery.

Beetle-Kill pine is what many in the wood industry refer to as the trees killed by the MPB. The fungus, previously referenced, that kills the trees causes a blue discoloration in varying amounts of the wood. This blue coloration leads to unique and highly varied color variation in each plank.

All In Our Heads?

Despite the continued panic upon seeing the rapid growth of beetle-kill pine flooding the Rocky Mountains, there is truly no real reason for worry about the forestland at this current time. Many pine lumber harvesters have rapidly begun utilizing the beetle kill pine to assist in sustaining their industry. This shift in attention has ironically given the green, or live, trees proudly standing a new lease on life.